Here’s an interesting fact for you: Did you know that since 2001, the 19th of November has been declared the World Toilet Day? Indeed, this day was created by the World Toilet Organization in 2001 and became an official United Nations day in 2013. Each year, UN-Water leads a group of international agencies to campaign around this theme sounds funny to you? Unfortunately, when we understand the purpose of this day, there is really nothing to laugh about.

The Figures are Alarming

It’s unacceptable that 2.4 billion people, more than half of the world’s population, still live without toilets. More than 892 million people still practise open defecation. The repercussions are immense. In countries where access to toilets is a problem, the chances of water contamination are high as bacteria spreads through the water supply causing countless casualties. No less than 432,000 deaths a year, to be more precise.

We Need a Solution Sooner Than Later

Chances are that if you’re reading this, you’ve never asked yourself the question: Can toilets save lives? The answer is yes! Since toilets help prevent the spread of deadly diseases caused by human excretions, the UN states that the provision of toilets could save the lives of more than 200,000 children. Not only are toilets essential for health, but the lack of them can affect the entire development of a country. In many parts of the world, children do not attend school due to the lack of toilet facilities. Or they avoid taking breakfast or drinking so as not to have to relieve themselves during the day. The situation is even worse for girls and women. Having access to a private place for their needs is a right and a priority for their wellbeing that is often ignored.

The aim of World Toilet Day is to raise global awareness about the crucial role toilets play in our lives and to encourage appropriate actions to meet a major challenge: safe water for all by 2030. 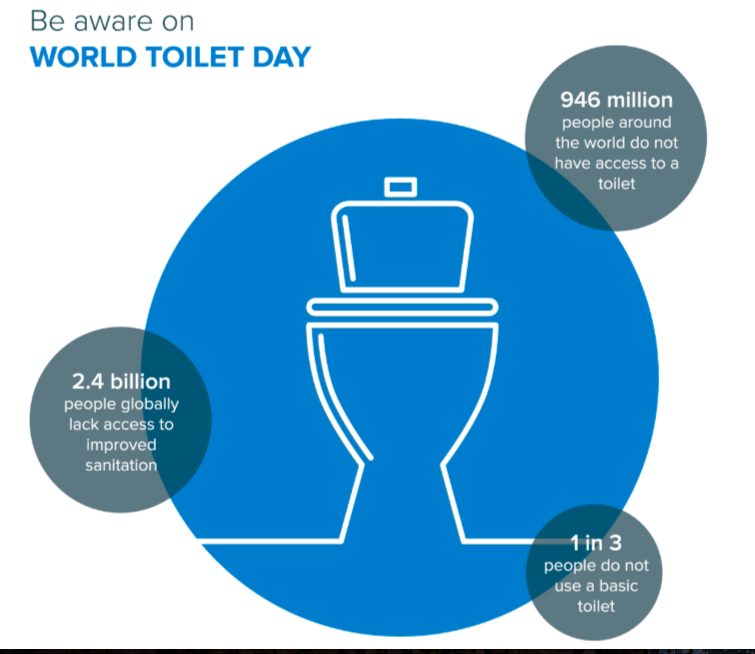 A Glimmer of Hope

There is hope, however. Positive changes have come about thanks to the many awareness campaigns that have been put in place around World Toilet Day. For many people living on the banks of streams, lakes and rivers in different parts of the world, World Toilet Day has proved a catalyst for change allowing for the progressive abandonment of poor sanitary habits and better use of latrines.

What You Can Do

If you are lucky to have access to clean toilets, congratulations! you’re part of the privileged half of the population. But that doesn’t mean you shouldn’t care. Be a voice for change and work to achieve equal access to toilets for women and special facilities for the disabled, or simply to promote good hygiene, whether at home or at your workplace. We can all make a positive change. But hurry up, it’s urgent!

The Unwanted Guests You Will Meet This Winter

Every change of season comes with its share of bugs… Winter is no different. In fact, it could be worse! To stay warm, b...

Dengue: The threat you may have missed

While the whole island was busy fighting COVID-19, another dangerous virus reemerged, unnoticed, in our midst. Each year,...

Our Disinfection Treatment: How we can help you fight COVID-19

On the 15th of May, the Mauritian government relaxed lockdown laws by allowing some businesses to resume their operations.  ...

5 Tips to keep pests away

In this time of confinement during which you are all safely at home, make sure that nobody other than your family members is ...

COVID-19 is spreading at an alarming rate and is a health threat to anyone across the globe. The international response to...

Since Antiquity, the month of February has been associated with love and fertility. As a matter of fact, we are not the only ...

Let the year of the Rat be rodent-free!

According to Chinese astrology, on January 25, 2020, we will be celebrating the year of the Metal Rat, which marks the start ...

Pests have been living with us since the dawn of time. To get rid of them, we’ve come up with all sorts of creative (and of...

Here’s an interesting fact for you: Did you know that since 2001, the 19th of November has been declared the World Toilet D...

The most dangerous pests – who are lurking around

Have you ever wondered how safe your home or office was? The answer is obvious: you have installed the latest alarm system in...