Take a look at your colleague sitting opposite you. Yes, the friendly colleague who eats sandwiches at his desk every midday and helps you carry your files to meetings. You love having him around, but chances are he’s one of the 62 % of office workers who fail to wash their hands after leaving the loo. Or perhaps he’s one of the 1 in 3 workers who escape to the bathroom just for some alone time in the office… Still, think the world of him?

Fact 1: Most of us are embarrassed:

For many, a trip to the toilet can be downright embarrassing. According to a survey, 52% of workers flush the toilet to cover up the sounds they make while on the throne. Don’t feel like wasting water? You can join the 6% who would rather hum a song than let their cubicle neighbour know what they’re up to. And they should be considering the next fact….

Sometimes toilet breaks bring out the worst in us (literally and metaphorically). One of the most hypocritical facts we’ve uncovered so far is that 15% of people don’t like to hear their colleagues passing wind… he who throws the first stone…

Fact 3: Many of us avoid the office toilet altogether:

Understandably, 54% of office workers avoid or try to avoid going to the toilet. No doubt to escape the people humming in the cubicles…

Fact 4: Many office workers don’t know how to use a toilet properly:

Despite 92% of office workers claiming they leave the toilet in the same state in which they found it, most are lying. A staggering 43% of people have found urine outside of the toilet bowl, and an unlucky 20% have even seen faecal matter. We apologize if you’re having lunch while reading this. 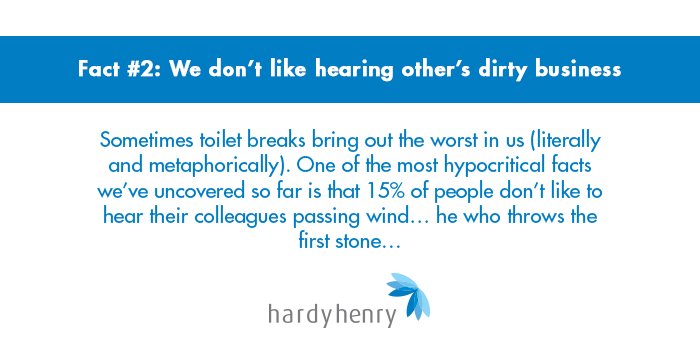 A lot of us like to do business while we do “our business”. 38% of people have admitted to sending and reading emails while on the toilet. Maybe that’s why smartphones are 10 times dirtier than toilet seats on average….

61% of office workers would like a cleaner office bathroom. Considering the stats listed above, that’s no surprise. Maybe they should tell their boss’ to give us a call… just saying.

Fact 7: We cringe whenever a client walks into our toilets:

Perhaps one of the most telling stats of all… 31% of office workers would hate for an important client to use their toilet facilities, lest all their hard work in the meeting room be undone by one miserable puddle of urine by the toilet bowl.

There you have it, seven facts about toilet hygiene which will hopefully make you more conscious of how you use your office facilities. Remember, your toilets are also part of your brand and how your staff and clients perceive your company. So keeping them clean is essential to protect your reputation and the health of all those using your facilities. Get in touch with us now and we’ll show you how.

The Unwanted Guests You Will Meet This Winter

Every change of season comes with its share of bugs… Winter is no different. In fact, it could be worse! To stay warm, b...

Dengue: The threat you may have missed

While the whole island was busy fighting COVID-19, another dangerous virus reemerged, unnoticed, in our midst. Each year,...

Our Disinfection Treatment: How we can help you fight COVID-19

On the 15th of May, the Mauritian government relaxed lockdown laws by allowing some businesses to resume their operations.  ...

5 Tips to keep pests away

In this time of confinement during which you are all safely at home, make sure that nobody other than your family members is ...

COVID-19 is spreading at an alarming rate and is a health threat to anyone across the globe. The international response to...

Since Antiquity, the month of February has been associated with love and fertility. As a matter of fact, we are not the only ...

Let the year of the Rat be rodent-free!

According to Chinese astrology, on January 25, 2020, we will be celebrating the year of the Metal Rat, which marks the start ...

Pests have been living with us since the dawn of time. To get rid of them, we’ve come up with all sorts of creative (and of...

Here’s an interesting fact for you: Did you know that since 2001, the 19th of November has been declared the World Toilet D...

The most dangerous pests – who are lurking around

Have you ever wondered how safe your home or office was? The answer is obvious: you have installed the latest alarm system in...